Ally Davies is the director of Aesthetic Realms and is also an artist, writer, designer, arts producer and film and festival curator and has worked in the creative and cultural arts industries for 17 years. They have produced and programmed a huge variety of high profile, cross-arts projects and events with an array of international and national artists and professional industry leads at different organisations (e.g. HOME, Manchester International Festival, the BFI). Ally worked in creative development in advanced project and event management at HOME for 7 years (guest highlights of events they have worked on include Oscar winners Danny Boyle, Asif Kapadia and Jenny Bevan). They are currently film curator and producer for a variety of organisations and festivals including Producer of Pilot Light TV Festival (the UK’s non-profit festival dedicated to celebrating the past, present and future of TV engaging with both international and national industry professionals, artists, experts and audiences- guest highlights include Christopher Eccleson, Lynn Renee Maxcy (writer of The Handmaid’s Tale HBO), Sean Locke (actor), Benedict Wong (Dr. Strange) Ben Crompton (Game of Thrones), Matt Zoller Seitz, Julie Hesmondhalgh and many more). They are also Creative Producer of Tree Fish Productions, producer of a new up and coming heavy metal and film festival (TBA) as well as film programmer for Indie Flicks International Film Festival.

Their academic career includes gaining a BA, MA and MPhil in Cinema and Screen Studies from the University of Manchester as well as attending Art School and Drama School. Their MPhil specialist research area explored post-9/11 American politics and the audio-visual aesthetics and design of space-based science fiction in film and television. You can check out their MPhil thesis here. They have presented research and many introductions to films at both national and international conferences including the South West American Popular Culture Conference in Albuquerque, USA, and at venues such as HOME. They are currently writing a chapter to be included in and up-and-coming Bloomsbury edited collection on film design 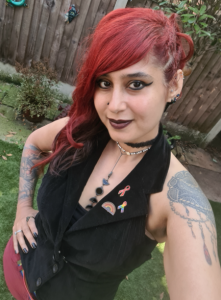 and as a freelance film journalist and film criticism writer have worked as a film article contributor on a number of platforms, past publications include The Modernist, HOME, Louder Than War and Manchester Wire.

Ally also currently works in freelance production design, costume design , art direction and scenography for film, TV and theatre. They are a mixed media artist, designer, writer, poet and trained actor, and have a background in filmmaking, directing, stage management and props making. In addition, they also write poetry for spoken word performance and write fiction for the stage and screen and are passionate about exploring themes in their work about nostalgia and place, the natural world (especially our links to water, biological evolution and marine biology),  the subversion of found objects, LGBTQ+ history, gender and sexuality, race, identity, alternative subcultures, witchcraft, mental health, science fiction and sexual expression. 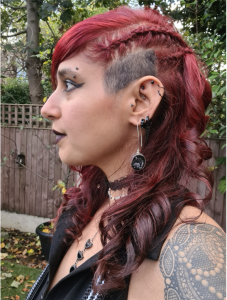