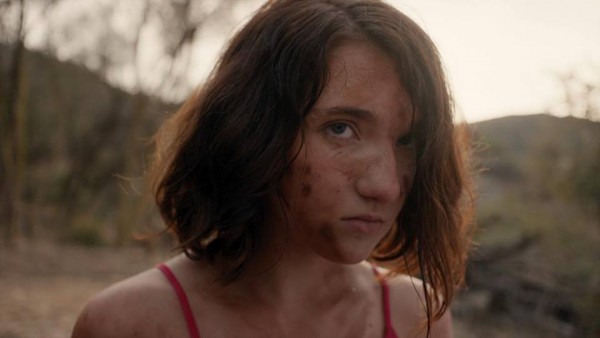 Between The Darkness Film Review for Louder Than War

Between the Darkness (2019) is the introspective horror debut feature from Andres Rovira. Vacationing in their secluded forest retreat, Sprout (Nicole Moorea Sherman), a 13 year old girl, her father, Roy (Lew Temple) and little brother, Percy (Tate Birchmore) quietly honour the death of their older sister, Magda (Daniela Leon), on the anniversary of her passing. Sprout, our main protagonist in this tale, is a homeschooled almost-teen living an extremely sheltered existence with her brother. She finds herself on the precipice of womanhood and sexual awakening whilst battling repression from her polytheistic father with a neo-pagan theology obsession and worship of the Greek pantheon of Gods.

Suffering sudden, uncanny sleep paralysis and hallucinations at night, Sprout believes she is being haunted by a monstrous Gorgon whilst having recurring nightmarish visions of her dead sister (who seems not to have shared her family’s strict life choices). As she continues to see the Gorgon in her dreamstate and when she is alone in the middle of the isolated woods, she begins to see the darker side of the religion’s folklore and embarks on a quest to vanquish the beast, cardboard shield and toy spear in hand. However, she uncovers a series of dark family secrets that turn her world upside down and take her on a darker journey. Tall, sinewy monsters may roam the fringes of this tale but here the horror may be closer to home.

We are introduced slowly to the Grady’s bizarre family dynamics (which echo shades of Captain Fantastic (2016) at first) and the conditioning that Roy has influenced into his children: total indoctrination of truths of Greek gods, twisted folklore and practice of neo-paganistic rituals. Having a father as the central parental figure is unusual in the genre as much horror has previously focused on single parenting with a woman rather than a man at the core of the family, but here the focus is on Roy’s relationship with his children.

Religion weighs heavily in this family of three, however, due to the focus of Greek mythology instead of a more contemporary monotheistic religion. It assists the viewer in being familiar enough to understand but distanced enough to hold up a sociological mirror to religion in our own society and view its sometimes fanatical effects objectively. We see the close knit threesome engage in some tender moments as well as in fun and games that are mixed with strange archaic rituals. Nevertheless, Roy’s behaviour steadily becomes more inconsistent, misogynistic and irregular with tyrannical undertones surfacing in contentious ways. He attempts to shape the way they think, both empowering their thoughts about certain ideas and then immediately quashing their individuality in the same breath; reason plays a distant part in this man’s delusional mind. As one watches the film it’s hard not to ask oneself what is worse, a demonic Gorgon or truly bad parenting? 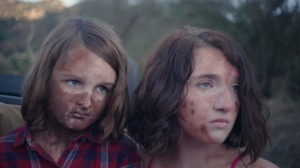 Parallel to this narrative is Sprout’s burgeoning sexuality that comes into extreme conflict with her father’s archaic notions of female sexuality. Of course, the theme of sexuality is a popular trope in horror, especially when it comes to exploring characters who have religious extremist parents (Carrie (1976) springs to mind). In some ways this is the most interesting thematic strand in the film and one can see the obvious connections between the Gorgon as a metaphor for anxieties of growing up and developing from a child to adult alongside sexual self-discovery.

For me, the most captivating element of the film was the enticing way that the film established atmosphere and mood; the cinematography, lighting, mise-en-scene, editing and soundscape were beautifully crafted. There is a real eloquence to LA-based Madeline Bergerwas’ cinematography as she shoots the film with remarkable skill. There is a delicacy to her use of colour, composition, movement and light that captures character emotion compellingly. There is also an interesting use of symmetry as well as lustrous, free-flowing shots that give weight to thematic expression and isolation in the film.

The achievement in sound design by Kevin O’ Farrell and Chris Richardson is also worth mentioning. They create a luscious soundscape with aural textures that deliver hypnotic otherworldliness. As the Gorgon represents anxieties of sexual repression, the soundscape in turn reflects anxiety, sexuality, otherness and frustration very effectively. There are intense moments of screeching, distorted muffled screaming, heartbeats, ritual drums, wind and guttural, carnal moaning that upsurge into a cacophony of reverberating oppressive sounds. (Though on a side note there is a very strange ADR (Automated Dialogue Replacement) choice that does not work at all.)

The creature design and appearances of the Gorgon are also done quite effectively; it subtly appears in the film out of focus and with blurring effects that help to keep it peripheral to the narrative and ensure the mystery of the beast remains intact. I have always been a fan of ‘less is more’ when it comes to horror SFX as the less you see the more effective a scare can be. The ethereal, dream-like sequences with the Gorgon are played with a subtle air which reminded me of similar techniques used in Let the Right One In (2008), a film that creates otherness and horror in a very unique way.

Despite some of its engaging aesthetic choices, what lets Between the Darkness down is some of the principle acting and the predictable trajectory of the narrative as well as rather overused horror techniques. Harrowing instances unfortunately descend into unintentionally comedic moments and pivotal key scenes become trite. It’s a good attempt at arthouse independent horror but doesn’t quite get there. The director goes to lengths to try to present this psychological descent into horror as a slow-building, pensive observation of a bizarre family and the beginnings of sexuality; the transition from kidulthood to adulthood and the discovery of the disappointment of people you thought you trusted and the secrets people can hide, which are all engaging themes to explore in a horror.

Whilst Between the Darkness has some wonderful elements and promise from the director, unfortunately it also misses out due to standardised predictability, some questionable acting and banal narrative development choices.

First published here for Louder Than War on 28th August 2019.