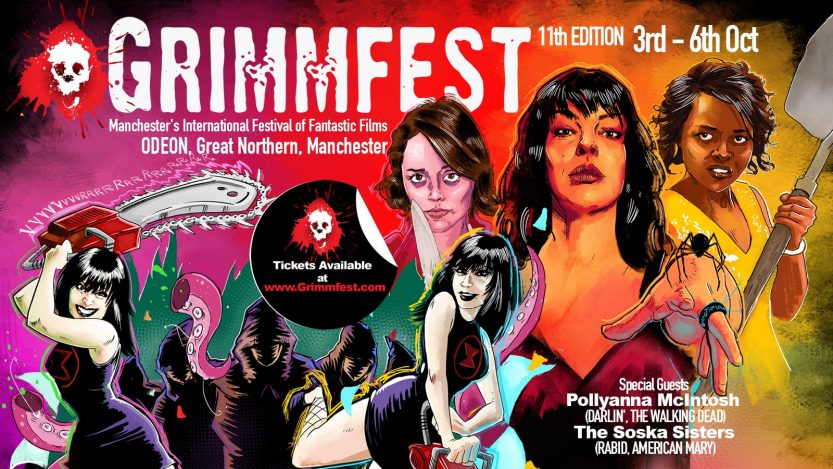 Ally Davies looks back on the Manchester-based, four day genre film festival, explores the bloody, beating heart of new horror cinema and reviews some of her favourites from the diverse programme.

Beginning the Halloween season in the most authentic way, Grimmfest, a four day independent horror and genre film festival, was perfect for an autumnal, spooky and not forgetting geeky October weekend; the type of event that I wish infused every weekend but sadly does not. Having always adored cult and horror cinema and growing up on genre pop culture, it’s like a second, strangely comforting home to me. The festival held at the Odeon, Manchester, was a diverse programme that showcased the work from new and established filmmakers from all over the world. Every film was a premiere in one way or another and new to Manchester itself. I was impressed by the diversity of the programme that featured a welcome multitude of horror subgenres and classic thematic tropes and icons such as zombies, slasher or survival narratives, paranoia, cults, extreme gore, witches, demons, dark comedy, the monstrous and comedy-horror as well as a very strong line-up of female directed and narrative-led films (aptly named the ‘F Rated’). They included Abigail Blackmore’s comedy-horror Tales From the Lodge (2019), Chelsea Stardust’s Satanic Panic (2019), Pollyanna McIntosh’s Darlin’ (2019) and writer/director duo the Soska Sisters (aka the Twisted Sisters) with their remake of Cronenberg’s classic Rabid (2019), who were awarded The Horror Channel Achievement in Horror Award at the festival. The response to their presence at the event was considerable and had guests queuing around the building in order to grab a quick selfie with the unique horror icons. The festival also featured a host of Q&A’s with directors, writers, actors and crew members and opportunities to meet the talent behind the films. 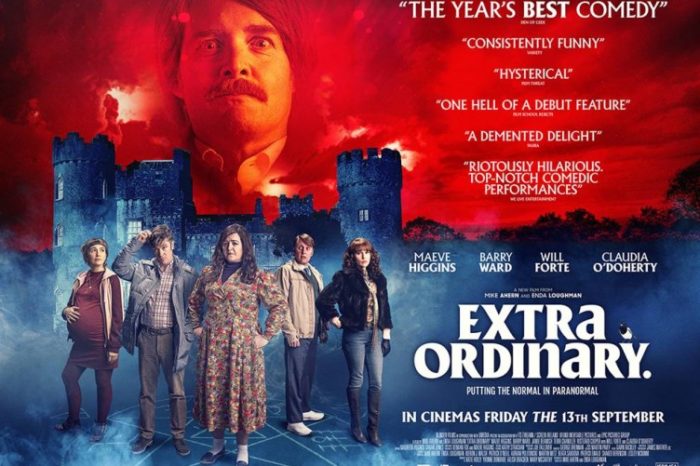 With an array of films packing the weekend to the brim, personal highlight for me was Enda Loughman’s and Mike Ahern’s debut feature Extra Ordinary (2019), a charmingly made irish, supernatural comedy-horror; cosy with an endearing cast and witty with its hilariously modest, deadpan humour that was largely self-deprecating and cleverly intertextual. It deservedly won the Audience Award and was also awarded a special mention in the Best Feature category at the festival. The film followed driving instructor Rose, a Medium who hides her supernatural gift after a tragic family accident and, trying to get on with her life, ignores any calls for help in her community for ghostly intervenings. On meeting a widower who needs her help ( and with whom she becomes infatuated with) when his daughter becomes the focal point of a ritual sacrifice, she decides to jump back into the supernatural world once more to save the family. Some charming elements include the way that the ghost world is presented; as a mundane, monotonous and dull existence in reality, relegating the ghost stereotype to being nothing more than entities with pathetically and painfully boring lives and having even more banal existences then when they were alive (for instance, only being able to move a branch or occasionally flipping a wheelie bin lid). Co-director Mike Ahern mentioned at the post-screening Q&A that they had been inspired by real and slightly bizarre ghost story headlines in newspapers such as the elderly being groped by ghosts in rest homes. That is precisely the type of offbeat concept that Extra Ordinary is routed in; a mix of extraordinary elements with the supernatural made ordinary. He said they were enticed by the idea of ‘shit hauntings and tiny ghosts’ which, tonally speaking, is what is created in this comedy. It’s full of extreme silliness, fantastic genre references for fans and sometimes silly gags but it all strangely works (even ‘he needs an ex-wife-orsism’ made me smile). Its consistently funny and demonstrates a refreshingly unique humour. It may be exceptionally loopy but that is what makes it such a pleasure to watch. Furthermore, the performances are right on cue; Barry Ward and Will Forte are laudable, but Maeve Higgins (who won best actress) is superb in leading the film with her quirky humour.

The well-deserved big winner scooping best feature, director and special effects was Kirill Sokolov’s Russian debut feature Why Dont You Just Die! (2018). The brutal comedy-horror has frequently been compared to the work of Tarantino and The Coen Brothers and is seeped in a colour palette reminiscent of Jean-Pierre Jeunet’s and Marc Caro’s Delicatessen (1991) and Jeunet’s Amelie (2001). It’s a fast-paced, bloody, hilariously macabre head-spinner with a non-linear narrative and great comic timing. Set in a Russian apartment, a man meets his girlfriend’s unscrupulous father for the first time which turns into a blood-soaked battle fuelled with splatterpunk surrealism. It’s a ‘meet the parents’ clash that is taken to new and horrific heights. The film may be a whirlwind of chaos but is well worth a watch if you love gorey, twisted carnage soaked in dark comedy. The film was awarded £80,000 worth of post-production services courtesy of festival award sponsor M2 MediaPost which can be used as finance against a future film production.

And speaking of gore-filled, darkest humour, indie-horror Harpoon (2019) directed by Rob Grant and witten by Mike Kovac was an extreme survival tale of three friends who become trapped on a boat in the middle of the ocean. As secrets, sexual tensions and jealousies unfold between them they are led to more severe violence against each other and to basic survival instincts that propels the narrative into hilariously deranged places. It strikes the right balance between shocking and outrageous and bursts at the seams with petulant, scornful bitterness winning it best screenplay. A star component of Harpoon is that the director achieves a sustainably entertaining piece within one setting; a boat lost in the middle of the open ocean. The characters are confined to essentially one room or a deck yet the narrative ticks along nicely and keeps your stomach in a pit of trepidation, suspense and curiosity as to how it will end. Though some of the characters are as vacant as the disembowelled boat they are trapped on and you don’t particularly care whether they live or die, it is a genuine play on the twisted morals of people who are stranded in selfish, self-serving constitutions and need to be banished from human society, preferably into the merciless elements.

Worth noting too was supernatural horror The Wretched (2019) by writer/director sibling duo Brett and Drew Pierce and David Marmor’s paranoid thriller 1BR (2019). In the middle of his parent’s messy divorce, The Wretched sees troubled teen Ben visiting his father in another town and discovering an ancient ‘tree-hag’ witch that haunts the nearby woods and who can possess the people around him. The highlights for me in particular were the audiovisual aesthetics of the sound and creature design which were beautifully innovative. The witch itself was presented as a contorted, inhuman, savage, animalistic creature that moves to the sound of cracking, twisting skin and bones; a welcome reinvention of a classic horror film icon and one that awarded it Best Scare at the festival.

In complete contrast, 1BR follows Sara, a woman who pursues her dreams (like so many do) to Hollywood and finds herself in a perfect apartment community. However, the dream quickly becomes a nightmare when the tight-knit community reveals its secrets and enslave and disconnect her from the outside world. What was once neighbourly and utopian becomes sadistic and twisted; belonging and togetherness becomes assimilation and compliance. The film explores the nature of cults and utopian communities in Los Angeles and Marmor explained at the Q&A that LA is a place for lost souls, searchers and seekers and so is a fertile ground for cults to prey on those who are passing through. It is commonplace to hear about lonely wanderers like Sarah, attempting to start a life and instead getting sucked into peculiar worlds. However, I would have liked to have seen the film become more extreme in its denouement and for it to have delved deeper into the character’s backgrounds and history of the community, perhaps making more of the metaphors it touches upon in relation to the world we find ourselves in currently. Nevertheless, the feeling of trepidation and slowly accumulating anxiety builds a sense of confinement, dread and desperation effectively into a quietly simmering exercise into paranoia and alienation.

The Shorts Programme also featured some strong contenders. I always find that short films are somewhat overlooked at feature film festivals, but this programme demonstrated some novel ideas showcased within a variety of budgets, themes, genres and narratives from around the world. Steven DeGennaro’s Stop (USA, 2019) explored the terror of dangerous power roles and racism that inspired immense feelings of anticipation, trepidation and disgust all from the simple premise of a traffic officer stopping three people in a car. There were some fantastic practical effects in films such as Faye Jackson’s Changeling (UK, 2019) and The Third Hand (UK, 2018) by Bury director Yoni Weisberg, the latter presenting an intriguing, fantastical metaphor for the dismemberment we do to ourselves and our own minds. And furthermore were some unsettling gems with Lucas Paulino’s and Angel Torres’ Bedtime Story where a family thinks it may be living opposite a witch (Spain, 2019), Sesselia Olafsdottir’s Turn (Iceland, 2018) exploring Icelandic folklore, and Justus van der Elsen’s The Glowing (Netherlands, 2018), an authentic period piece featuring a beautifully designed VFX ancient evil that resides in the farmlands. Scooping best short film, was Limbo (2019), a disturbing, haunting film about self-destruction that sticks in the mind long after watching. Its showcased fantastic performances and particularly good sound effects.

All in all, a fantastic programme which was thoroughly enjoyed by audiences throughout the weekend. But, Grimmfest is not only about the films. For me, it’s about a community of genre fans sharing in the joint enthusiasm and emotions of the work. It’s a place where geeky cult film and television enthusiasts can share in a kinship of shared praise and wonder. As well as the programme, what makes a film festival enjoyable is the atmosphere created by the surrounding events, the audience and the shared adoration of popular culture. There is always something about a genre film and television audience that makes me feel a sense of belonging like no other. Amongst the array of cult film t-shirts and pin badges was a delightful melange of stalls selling specialist cult genre gear, collectables and obscure posters and trinkets filled with fandom glory which more than adequately fed my obsessive compulsion for cult merchandise (im very proud of the fact that I even found a Halloween themed The Thing (1982) pin badge which substitutes the ‘spider-head’ for a pumpkin). It was a thoroughly special weekend with some intriguing cinema gems and engrossing moments with filmmakers. It’s great to be reminded that the bloody, beating heart of horror is still alive in all its deliciously horrific glory.

First published here for Louder Than War on 31st October 2019.