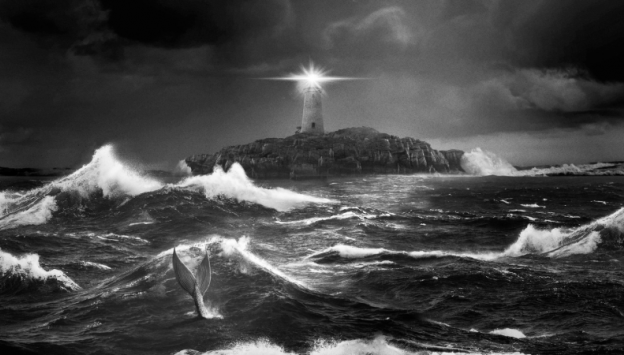 The Lighthouse Film Review for Louder Than War 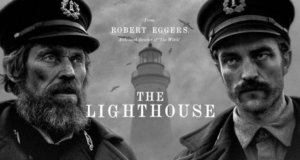 Two men trapped in a giant phallus driving each other to madness seems to be as far away from Robert Egger’s debut feature VVitch as you could get. Ally Davies explores the experimental, dark, richly intoxicating world of The Lighthouse and its hauntingly immersive elements…

From the acclaimed director of VVitch (2015), The Lighthouse (2019) is Robert Eggers’ second feature; a disorientating, psychological horror that, like VVitch, showcases a love affair with the time, era and place with which it is set. The film unravels as a disturbing, nautical nightmare which attempts to suture its audience into its brutally windswept, filthy heart; you can almost be tricked into thinking that you can taste the salty sea grime on your own face.

Set in the 1890s (and inspired by the early 1920s and 1930s lighthouse film genre), two lighthouse keepers arrive on a storm-ravaged, remote New England island to begin a month-long lighthouse shift. The (in equal parts) vulgar and hilarious loud-mouth Thomas Wake (Dafoe) is an older, more experienced ‘wickie’ and former sailor with a penchant for sea shanties, poetry and endless maritime stories involving folklore, harbouring issues with alcoholism and anger management. Ephraim Winslow (Pattinson) is his newbie apprentice, a quieter, solitary man of few words who purely wants to get on with the job at hand. Over the course of their time together, Wake constantly patronises Winslow forcing him to perform the lowest-ranking duties whilst Wake solely attends to the lighthouse. Fuelled by dwindling supplies, vicious weather, drinking, paranoia, loneliness and secrecy, their relationship becomes problematic, brutal and eventually violent. Strange things begin to occur, the lines between myth and reality blur, power struggles develop and they descend into madness as they face their inner demons. Is this a supernatural fantasy or are these men living in a more personal kind of eternal nightmare? Is this a dark, coastal limbo engulfed in male aggression, competition and resentment, visually manifested as confinement inside a giant phallus of toxic masculinity? Either way, the film becomes an exploration of mental health, identity, the impact of isolation and paranoia… and a technical experiment on the boundaries between the real and surreal. The film may contain many different thematic strands but at its core it is about two men who lie to themselves whilst in utter denial about who they are. 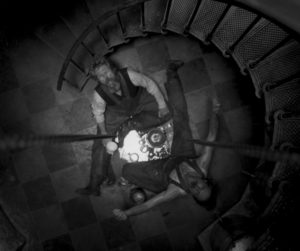 Like many psychological horrors, The Lighthouse is richly embedded with symbolism and offers a number of readings. Though the premise may seem to have much to offer in terms of character and intrigue, unfortunately, it feels to me somewhat of a missed opportunity as I was left wanting more from the narrative. On my first viewing of VVitch I’d felt totally and completely embedded in the emotional depth of the characters and the balance of form and content was, in equal measure, exquisite. But with The Lighthouse I found myself falling in love with the aesthetics, the delicious detail and dedication to world-building, but my enjoyment of the content washed away quickly. This being said, it is still a film to thoroughly enjoy watching and hearing in the majesty of a darkened cinema with surround sound. The show stopping component of this film is the provocative and affecting audiovisual identity and the execution of those design elements. The detail in this film is certainly not to be missed. Neither are Willem Dafoe’s facial expressions for that matter.

What I respect about this particular director is his obsessive enthusiasm for detail. As a life-long academic of the excruciatingly tiny details of cinema, I adore a filmmaker who totally immerses their audience within the diegesis of the film. I love being drowned in textures, sounds and tonalities and the film is replete with all of those elements. As a director, Eggers enjoys transporting his audience, and in setting out to do that, the devil (or rather the watery demon-kraken) really is in the detail. Primarily, he is an avid researcher: on his previous film, VVitch, he spent a great deal of time researching the myths and folklore, the precise discourses and lexicons, the fabrics and even the instrumentation of the era and collated all of that information into the very materials he used to make the film. The score was solely composed by instruments found at the time, and similarly only the materials found in that era were used to make the costumes and build the sets. In The Lighthouse, much research was done by Robert Eggers and his co-writer brother, Max Eggers; their love of folklore and myth is intoxicating and flows through every fibre of the film. They researched through masses of Greek, sailor and maritime folklore, coastal poetry, archives of real lighthouse keeper accounts as well as through historical paintings and literature. Everything in the film references something; it is a cleverly constructed melange of accounts, stories and intertextual references, and although they may not be totally obvious to the viewer, subconsciously perhaps it all adds to the believability of the world being created.

When it comes to its audiovisual aesthetics, there is an overwhelming amount of atmosphere in the film; The Lighthouse becomes a tempest on all of the senses. It is very much a film that engulfs you from the beginning with its intense audiovisual identity which is synchronously deafening, mesmerising and unsettling. The film not only pushes its characters to the brink but the aesthetics place the audience deep within a world where every sensory faculty is driven to the edge. The Eggers brothers conceived of The Lighthouse halfway through making VVitch, another film set in an evocative and unnerving, natural place; from the isolating gloominess of the New England woods to a storm-ravaged, deserted coastal island. 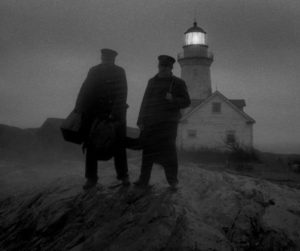 When deciding how to shape the form of this story, Eggers and cinematographer Jarin Blaschke (who also worked with Eggers on VVitch) wanted to develop their own unique camera language and had spoken extensively about how they wanted to make something that looked like nothing they’d ever seen before. What will strike the viewer first and foremost is that the entire film is shot in a 1.19:1 screen ratio (and in 35mm) in black and white with a very specific orthochromatic look. This ratio lends a certain amount of claustrophobia, a key theme that permeates the film. Using these techniques also emphasises connotations with certain photography of the era and makes reference to early cinema. Additionally, the chiaroscuro effect within the lighting is effective in adding an almost expressionist-noir tonal quality; a technique that at first looks complex but in reality was made simple by Blaschke using only key light, rather than adding in the traditional back or fill light. Blaschke is also widely known for his unusual tastes and approaches to filmmaking; it was no surprise to the crew that he decided to use camera lenses from 1905, 1912 and the 1930s. This came with its own issues as the extreme weather conditions in the film were for the most part real and so the lenses were easily damaged and unfortunately irreplaceable. The contemporary cameras had to be refitted to hold these older lenses forming a blend of different-era technology, which as far as they knew had never been done before in a feature film. These elements in particular conjure ideas of early cinema which immediately anchors the audience in a historical era, a place far away and long ago, perhaps even somewhere at the edge of the world. 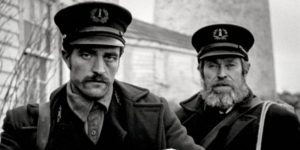 Furthermore, what is striking in the film is the very intentional, precise composition of each shot. Blaschke is very controlled in what he wants the audience to see and how he wants you to interpret the location, the characters or the objects within the space. The tight framing of the shots and aspect ratio conceals part of what may be going on to the viewer; we are denied information thus heightening our trepidation. Every frame is a portrait of incredible skill; the compositions, the placement of lighting, the mise en scène and the props give us an incredibly structured glance into a beautifully detailed, textured and repulsive world. 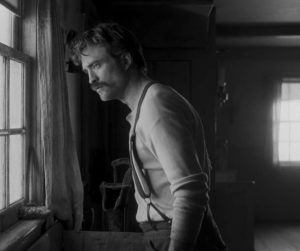 On seeing both his features, it is easy to see Eggers’ beginnings in theatre, particularly in terms of staging and the lengthy dialogue his films contain. The Lighthouse is almost a two-hander on one cramped stage. Both actors deliver superb performances and their interaction is magnetic. The dialogue is often like barbaric poetry, though difficult to understand at times, beautiful in its construction and containing incredibly funny twists of filthy insults. Dialogue was important to the Eggers brothers and they spent months researching the dialogue using nautical dictionaries and historical sources from literature.

In terms of sound design and the score, this is another area where The Lighthouse shines (apologies, these puns are unintentional and seem to be writing themselves). I personally consider Mark Korveh’s (VVitch) score for The Lighthouse to be one of the most superb atonal scores in recent cinema. It conjures up many tonalities from films such as 2001: A Space Odyssey (1968), There Will Be Blood (2007) and Annihilation (2018). It is both guttural and disturbing in the most delectable ways. Korveh uses a series of unusual musical apparatus, for example, metal spheres placed on cymbals, along with more traditional instrumentation such as strings and horns (even a harmonica is used to menacing effect) used in unconventional ways to simulate foghorns, animalistic whale sounds, screeching weather and undulating sounds of water. The textures are hypnotic and terrifying with some that swell and flow over you, some that contain merciless malice, and some amazingly cavernous tonalities that replicate large marine animals in a voluminous watery trap, accentuating the total emptiness and loneliness of the protagonists’ fate. It’s a delicate score when it needs to be and a grandiose swell of deafening textures in particular moments to deluge the viewer in a watery nightmare. In addition, supervising sound editor Damian Volpe wished to bridge the gap between sound and music so that his sound complimented Korveh’s score; Volpe recreated Korveh’s textures with unusual foley layers and even used strange sea creature sounds made by himself and his wife. 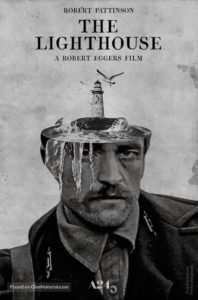 The Lighthouse is a film that drives a sledgehammer right into your eyes and ears and skull with its striking execution; it’s a shame that the narrative doesn’t impact you in quite the same way. However, every detail adds to a total immersion in The Lighthouse world; the abrasive dialogue, the grimy living quarters, the sweaty faces, the sharp, rocky beaches, the spectral sound design and score, the violent natural world, the authentic props, the old lenses and the almost painting-like cinematography. In terms of cinematic language, Eggers is more accomplished than most directors and it’s only his second film.

First published here for Louder Than War on 27 January 2020.